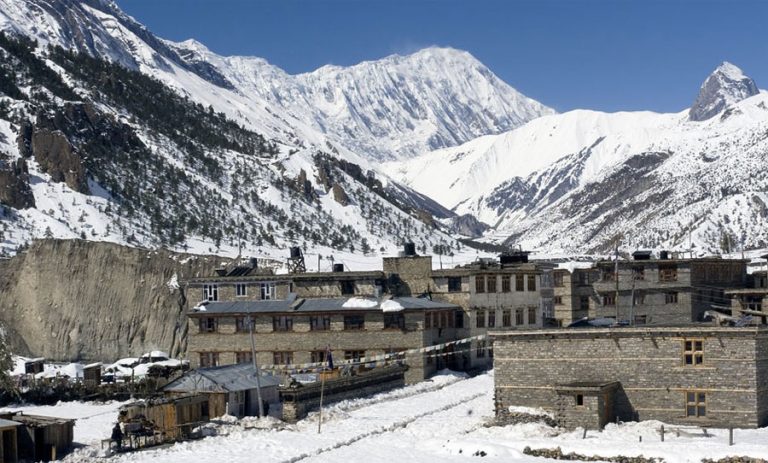 Manang Tilicho Lake is an amazing trek that showers you with a wide variety of natural excitement. This trek takes you to visit beautiful Manang valley with the desert-like wild terrain and then Tilicho Lake, considered as the world’s highest lake located at 4,920 meters from sea level. Indeed Manang Tilicho lake trek is one of the most spectacular trekking routes in the world with lush green valleys, fascinating villages, and arid landscape offering impressive snow-capped views of the white Himalayas.

Manang opened for foreign trekkers in 1977, is one of the most beautiful hidden valleys and villages of the Himalayan territory. This valley is inhabited by ethnic group people like Gurung and Magar who mostly follow Buddhism. It is enriched with lively traditions of ancient heritage. The isolated valley is the best place to admire the views of mountains like Chulu range, Gangapurna, Tilicho Peak, Kangaru Peak, and Throng peak. 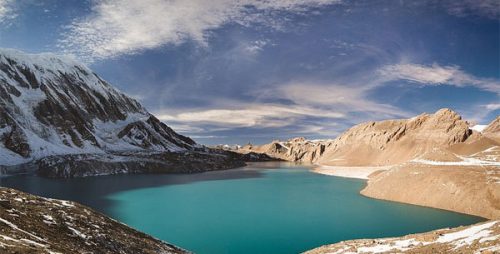 Tilicho Lake sits at the foot of an extensive glacier system of Tilicho Peak (7,134 m). It also collects the glacial melt of the entire northern slopes of Annapurna and Thorong Peak. The glaciers terminate in a vertical wall of ice 70m high. It forms the west shore of the lake.

The trek begins from less than 1,000 meters, it gives us a chance to explore the Himalayan region from bottom to top and from many different angles and perspectives. Besi Sahar is the starting point of this trek. In the beginning, the trail follows the Marshyangdi River, with great views of Manaslu and Himal Chuli to the east.

Eventually, the trek leads you to the different villages, inhabited by a wide diversity of people from different ethnic groups, offering spectacular and majestic views of the Himalayas. After reaching Chame, the headquarter town of Manang district, you then trek into lovely cool woodland of pines and rhododendron tree lines and then green vegetation fades for the arid and barren country to reach Manang village. Manang has located at the high and dry Tibetan Plateau which the scenery is equally breathtaking.

Manang is the best place for trekkers who are crossing Thorong La Pass and also go to visit Tilicho Lake.  There are many interesting places to visit in Manang. The most popular is to visit the glacier lake at the slopes of the Gangapurna Mountain, the village of Braga, Buddhist monastery.  From Manang, you trek a further couple of days to reach Tilicho Lake. Then you retrace to Manang. While back from Manang you take a jeep ride to Besisahar. From Besi Sahar, you drive to Kathmandu by bus.

Manang Tilicho Trek is a moderate type of trek. It is neither very demanding nor less demanding. However, you should be fairly fit and should be able to endure long walks uphill and downhill.

In summary, the major highlights of the Manang Tilicho Lake trek are as below:

After arriving at Tribhuvan International Airport, Kathmandu you will be warmly welcomed by our tour officer. He assists you to transfer your hotel. At the hotel meet your guide and tour briefing. Preparation for the trip.  The rest of the day is free to explore Thamel Market. Overnight at Hotel in Kathmandu

Have breakfast at the hotel. Then set your drive journey to Besi Sahar. Driving takes around six hours. You drive along the Kathmandu-Pokhara highway. Upon reaching Besi Sahar, check-in your lodge. Besi Sahar is the headquarters of the Lamjung district of Nepal. It is the starting point for Manang Tilicho Lake Trek and also Annapurna Circuit Trek. Overnight at Mountain Lodge

Today is the first day of your trekking. After breakfast, you follow the trail make the climb to Khudi, the first Gurung village at 790m. As you continue from Khudi you see the views of Himalchuli and Peak 29 (Ngadi Chuli). The trail climbs to Bhulbhule at 840m, it then goes to Ngadi before reaching Lampata. Then you arrive at Bahundanda. Overnight at Mountain Lodge

After breakfast, you follow the trail which descends to Syange at 1070m. While leaving Bahundanda you will see a large waterfall. Then you come to cross the Marsyangdi River on a suspension bridge. You will follow the bank of the river to Jagat village. Then by short climbing through the forest you reach Chamje. Overnight at Mountain Lodge

Today you begin trekking with the rocky trail followed by the Marsyandi River. Then the trail climbs up steadily uphill to Tal village at 1675m. After Tal, you follow a trail verse crossing a wide, flat valley. The trail goes up and down to reach Dharapani village. Today you move ahead from Dharapni for a night halt. You will stay at Bagarchhap at 2160 meters. It is a Tibetan-influenced village with Chorten and typical flat-roofed stone houses. This is a village surrounded by apple Orchards and maize fields. Overnight at Mountain Lodge

After breakfast, you follow the trail climbs to Danque village, then to Timang village. From here onwards trekking you can view Mt. Manaslu 8,163m / 26,781ft. From Timang village few hours trek leads to Koto and then to Chame. In Chame, you will be rewarded by the fine views of Annapurna II. Along the route, you will be introduced to a local community who migrated from Tibet a long time past. Chame is the major town and also headquarter of Manang District. Overnight at Mountain Lodge

Leaving Chame, you trek into a cooler area from here onwards closer to the Himalayan region. You trek through nice alpine forests of rhododendron and pine trees following Marshyangdi River upstream with short ups and down hills to Bhratang village. From Bhratang village the trail follows uphill through alpine woodland overlooking Chulu’s and Pisang peak to reach Dhukur Pokhari. Then you descend to lower Pisang village.  Overnight at Mountain Lodge

Leaving Pisang, you have alternate trails north and south of the Marsyangdi River which meets up again at Mungji. The southern route is called lower trail by Hongde, with its airstrip, at 3325m which involves less climbing than the northern route (upper trail) via Ghyaru, though there are better views on the trail that follows the northern bank of the river. From Mungji, the trail passes the hidden picturesque Braga village at 3475m. In this village, you may visit Braga gompa, which is 500 years old. Also, you can visit Ney Guru Sang Phul cave. There you can find a statue of Guru Rinpoche. From there you descend downhill in a slippery and steep path and move to Manang (3540m). You reach Manang early in the evening. Manang is a town that has a lot of teahouses, guesthouses, and even a bakery. Overnight at Mountain Lodge

Today you spend the whole day doing some fine day walks by overviewing the magnificent views around the village. You will wake up with the fantastic scenery of the sun rising over the pristine silver Himalayas. Then you visit a glacial lake formed in the foothills of the Gangapurna glacier. The azure blue lake is awe-inspiring. There is a beautiful Chongar viewpoint that takes about half an hour of trek. You may also visit the Trekkers Aid Post run by the Himalayan Rescue Association. The beautiful Manang area has many exploration points. You should follow the guidelines of eco-tourism and reduce your carbon footprint as much as possible. Overnight at Mountain Lodge

From Manang, we trek towards the western gates and follow the path down to the river. After crossing the river, you will continue walking on its southern side through coniferous forests. The Sooner you reach Khangsar Village. From Khangsar you will trek further to Sri Kharka and pass a monastery on the way. In the route, you will have the Gungang Himal and Mount Chulu in the backdrop to keep you company. Overnight at Mountain Lodge

Today’s trek will be relatively easier because the trail from Siri Kharka to Tilicho Base Camp isn’t very steep but it might be tiring as you will have to walk on narrow paths in loose stones and landslide-prone area. This trail offers you a panoramic view of Tilicho Peak. Tilicho Base Camp is located at 4140 meters from sea level. This is the last place where mountain lodges are available before Tilicho Lake. Overnight at Mountain Lodge

Today you head out to Tilicho Lake in the early morning when there is less wind. As the day progresses the winds tend to increase. The initial climb is slightly tough. Then the path continues to pester along the side of the mountain in a gradual steep rise before reaching the watershed. On the way, you can enjoy yaks and deer grazing along our path. On the other side is Tilicho Lake, a large spectacular lake nestled at the foot of the north face of the Tilicho Peak. The lake was referred to by the leader of the French expedition team as ‘The Great Ice Lake’. The Lake also holds an important place for the Hindus as this holy lake is featured in one of the holiest texts of the Hindus, The Ramayana. After spending some time at the lake, we will retrace our step and return back to Siri Kharka. Overnight at Mountain Lodge

Today you trek back to Manang following the previous trail via the Khangsar Village. After reaching Manang check in your lodge and rest. Overnight at Mountain Lodge

Today you will ride a jeep from Manang to Besi Sahar. After breakfast, you board the jeep that takes off early in the morning. The road trip takes a long adventurous way and overlooking the beautiful snow-capped mountains. Overnight at Mountain Lodge

After breakfast, you drive from Besi Sahar to Kathmandu by the previous road. The journey passes through the winding roads on the green hills. After your arrival in Kathmandu, you can check in at the hotel. You can take a rest or do some souvenir shopping. In the evening you will be offered a farewell dinner at an authentic Nepalese restaurant in Kathmandu to celebrate the successful completion of your journey. Overnight at hotel in Kathmandu

Depending on the time of your departure, our tour officer will accompany you to transfer Tribhuvan International Airport for the flight of your onward journey. Goodbye! See you again in Nepal for the next adventure.

Excellent Himalaya Trek and Expedition is the leading trekking operator and company managed by local tourism experts and Sherpas who have more than 20 years of experience organizing treks and expeditions into the Himalayan zone. We will take care of all permits and logistical matters, including food and accommodation on the Manang Tilicho Lake Trek.

Please contact us by email at [email protected] or WhatsApp/ Viber at +977 9851203181 for a package cost of Manang Tilicho Lake Trek mentioning no. of people interested in this trekking. Once we receive your request message, we get back to you within 24 hours.

Have you any questions?

If this trip doesn't suit you?

Why travel with us?